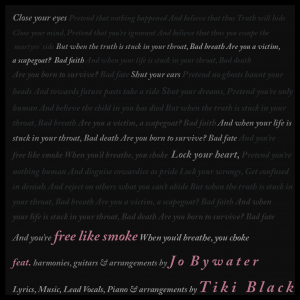 The contemporary folk singer known as Tiki Black has released her latest single, “Free Like Smoke,” featuring Jo Bywater. The track is the most significant release from Black since her 2013 LP record, “Out of the Black.” Both releases have been published on the No Sugar Added independent music label. Sonorous, melodic and carrying on its shoulders a heartfelt narrative, “Free Like Smoke” is a poignant reminder why Tiki Black’s fan base continues to grow around the world.

Parisian-born Tiki Black cites as main artistic influences Bob Marley, Georges Brassens, Alanis Morrissette, Tori Amos, Eboa Lotin, Dolly Parton, Barbara, and Charles Aznavour. Her own sound on “Free Like Smoke” is grounded in the traditions of folk music, yet surpasses these with modern nuances all her own for a tone that is incomparable to the styles and timbres of her contemporaries both inside the genre of folk music and out.

Speaking of the theme of “Free Like Smoke,” Black writes, “The single speaks of someone who finds it hard to get their head out of the sand and, missing the silver line, also misses the opportunity for personal growth. That is to own one’s life and empower oneself to change it.”

The single comes from her acclaimed “Out of the Black” LP, which has garnered accolades from critics and listeners alike.

“’Out of the Black’ is about coming out of hiding, being released, using the analogy of a birth with [the negatives of] pain and fear turned positive through creation,” she explains.

Certainly, there can be no hiding for Tiki Black now that the public ear has turned her direction. Spiral Earth writes of her, “The voice is the instrument that draws us in, it can challenge or comfort us, awaken us or lull us, inspire or reassure. Tiki Black has a voice that can do all of this and more … Warm, embracing and timeless.”

Junior’s Cave lauds, “Tiki Black is the perfect poster child for what it means to be a genuine indie performer . Black’s music speaks to a generation that needs a voice that knows their pain, joy, achievements, failures, and struggles. She sings from the heart, and Black’s music pours out her soul to her listeners … This publication is in love with this artist’s music.”

Glasswerk calls her music “Songs that tug at the heartstrings without ever giving the impression they were written purely to do so.”

Speaking of her start in music, Tiki Black relates, “I started to sing and write songs early but I never really thought of it further than something that is natural to beings, like breathing. Expression was not just about exorcism or exhaling, it was about creating something new from what existed, a sort of poetically multi-dimensional recycling where the end art would present the original from one of its hidden, yet beautiful perspectives. Little did I realise how impossible it would be for me to just keep it as a side passion.”

“Free Like Smoke” by Tiki Black features award-winning Folk/Blues/Americana music artist Jo Bywater. “Jo’s music sensitivity and craft were perfect for this track and I am so grateful that she accepted to work on it with me” reveals Tiki. The single becomes available online worldwide 15 December 2015. Get in early, folk fans.

Play and get your copy of free like smoke

The fans who have been supportive and bought the album itself will receive the main track of the single as a free download. Simply contact management (at) tikiblack.com with a proof of purchase (we know you if you purchase at a gig simply give your name and the concert venue 🙂 ) and a download code and instructions will be emailed back to you!

Get the single featuring Jo Bywater now:
On Amazon
On Bandcamp
On iTunes/Apple Music

To thank you for being a great fan, I have made this single free for download. So if you can access this (and just spent 2000 points on it) it is because you got those from buying the album or doing something awesome like that. You can hear the song first and listen to it as many times as you’d like and download it here too!

Get the award-winning debut album now!