Performing at Mello Mello Cafe is a privilege: between a venue with so much character, an audience that loves their music, organisers so attentive, I felt connected and in my element. Going there with my friend, pianist and composer Korlan, was just the cherry on top. The Mello Mello manager (I think that is who it was) had had their piano tuned up so I didn’t have to travel long distance with my heavy stage piano.

The show started later than expected which meant we started running out of time. So I decided to cut my bit shorter so the main artist of the night, Jude Waldman could play on time. The evening was brilliant with artists as diverse as entertaining.

Jude Waldman was quite an interesting entertainer. Although our music genres were different, our love of music connected each of the artists that played that night.

I had a great time at Mello Mello. I met great people including a mother and daughter from France who got to hear the only French song of my debut album, Le Cinquième élément (The fifth element) and understand it.. I also reconnected a little with myself and was lucky enough to be included in a Glasswerk review of the Jude Waldman show and support acts. The article remarked about my songs and perfornance, among others, that:

“These are songs that tug at the heartstrings without ever giving the impression they were written purely to do so (…) There is obvious talent here…” – Peter Robinson, Glasswerk (Oct 16, 2010)

Later on, a member of the audience came to me and made a comment that sparkled something inside of me. They said a few things but particularly, they mentioned something about my music being “a breath of fresh air” (thank you) and that is all it took for me to write the song Out of the Black!

A lot more did happen. This includes Korlan buying me whisky (is it whiskey) and this affecting my voice to the point that I had to transpose the songs’ notes, espectially for Open Your Eyes. It definitely sounded different and interesting, paradoxically for me because it was like rediscovering a song I had written. I even remember using the “monkey” technique that Geli Berg taught me for warming up my voice. Now I don’t remember if she called it that, but that is what I call it. I also remember having a crush there for someone far too easy on the eye. Naughty Korlan encouraged me to pursue this, but I have this way of self-sabotaging when it comes to having to create something as opposed to letting things naturally happen. 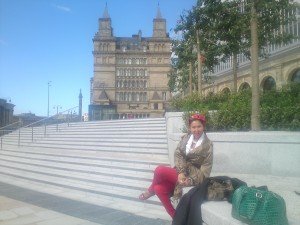 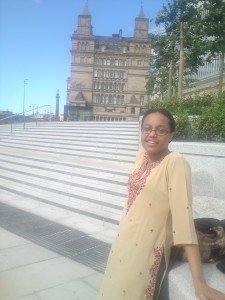 Update on the Mello Mello gig and day out

The day in Liverpool was eventful. Inside and outside Mello Mello, Korlan and I had a proper adventure. We took some photos on the way there. I remember that I still had my cane and basically could not stand most of the time so even on the photos, I am either sitting or leaning. But I definitely had a great time. Yes, I did, even though we missed the last train, even though Korlan kept on teasing me about missing a hookup opportunity. I still smile thinking about that day, until I remember that Mello Mello no longer is and neither is Korlan. R.I. P. my friend. It is a real pity to lose some staple venues like Mello Mello, that made such a positive contribution to the music scene. But I still believe that the world truly misses out with Korlan’s departure. Check out Korlan’s music here.